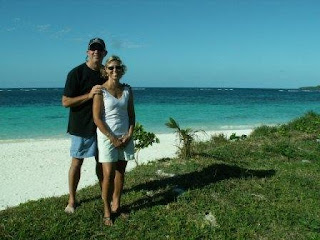 When we departed San Francisco in late 2004 we never would have thought that we would be writing an update to our friends and supports four years later, with more than half the world and approximately half the sailing miles to complete The Blind Circumnavigation. Still, with 50% of the world to visit, we have experienced a voyage far beyond our greatest expectations and wildest dreams.

We wish we could say that this past year was our smoothest, and while it was one of our most interesting years, it was a year chock-full of challenges.

During the 2008 cruising year we faced a dangerous knockdown on the Coral Sea, causing extensive damage to our dodger and bimini, while flooding the bilges to capacity, and ultimately causing us a two month delay in Noumea, New Caledonia. It was also a year of physical challenges. Pam developed a completely unrelated eye condition that led to ocular hemorrhaging and two retinal tears, requiring emergency surgery in Sydney.

Yet, with the fortitude and determination that has been the cornerstone of this voyage, we have faced and overcame our challenges and today we are more prepared, more experienced, and more determined than ever to complete our goal of sailing around the world.

Far outweighing the challenges are the wonders of the world that we have experienced including the beauty and senseless mining erosion of the islands of New Caledonia. We have witnessed the fiery awe of the active volcano Mount Yasur. We have been treated to the hospitality and warmth of the gentle people of Vanuatu and seen a beautiful way of life largely unchanged by modern civilization. We have met wonderful new friends who have shared with us the experiences of blind and visually impaired people living in the western South Pacific, and we have offered some of our experiences in return. We have swum in the bluest of waters and fed Kingies (King Fish) by hand. And we have met amazing new friends. This year has been a continued collage of living every moment to the fullest with each new day creating unforgettable memories.

Currently Starship is right back where she started last year, in Newcastle Australia. After visiting New Caledonia and Vanuatu, we were posed on the brink of departing for the Solomon Islands when Pam experienced the vision loss that would eventually necessitate emergency surgery in Sydney. Scott sailed the boat singlehanded from Oyster Island to Port Villa, Vanuatu where he was met by blind sailor and friend Tony Purkiss and new friend Patrick Silver who crewed with Scott back to Newcastle.

Starship is now waiting out the Southern Hemisphere Cyclone Season again, positioned at the last port which Pam has independently sailed to, allowing us to continue the forward progress of the voyage without outside assistance. Pam is currently working in Sydney and is still recovering from her sudden retinal damage and will undergo another surgery in the near future. Her doctor assures her that she will be able to continue the voyage at the close of the Cyclone Season this May or June. Scott is temporarily working in Northern Virginia and will return to Australia early this year after completing a round the world plane trip including stops in Venice Italy, Istanbul Turkey, Bangkok Thailand and Saigon Vietnam. The cruising kitty is getting a much needed feeding and Starship is undergoing the annual upkeep to prepare her for the coming year.

So, to sum up the year, yes we have had our struggles, but please don’t be concerned. We see the challenges only as the contrast by which we can appreciate the truly spectacular experience we are living and sharing with all of you, our friends. Get ready for what comes next because with destinations like Papua New Guinea, Indonesia, Thailand and beyond coming soon, we will have much to share about the world and the people living with vision loss wherever we travel.

Pam and Scott, maybe, you would be interested in registering and introducing your selves at Blind World message board.

It appears to me that some of the members registered, so far at Blind World are college kids.

Here is the url for Blind World Message Board, USA: http://blindworld.freeforums.org/

Blind World message board is a site for blind people to communicate about blindness and everyday life. Folks interested in blindness are also welcome.

I love reading your adventures!

People who are blind, are eligile for a free fishing trip. I hope to meet youse guys one day.

I look forward to hearing from you.

FWIW: Pam and Scott, I posted here, only because on your blind sailing website page, contact/email us, I get an error message attempting to contact you.