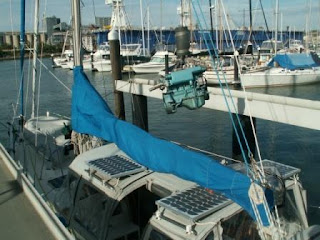 This is a quick update to keep our website followers up to date. We have been extremely busy trying to sort out our engine issues. Although we have not made recent postings we have kept extensive notes and we will soon fill the gap between entries.

Our engine died just outside the Sydney Heads. We tried to save some coconuts and bought a rebuilt engine. It took FOREVER to install the rebuilt engine, and then the rebuilt engine kept having problems until we finally sent the sucker back. We just got our coconuts back and put them towards a band spanking new engine that will be installed over the next 2 -3 weeks, and most importantly it has a WARRANTY! Now it is late in the cruising season with cyclones breathing down our necks, and we are trying to revise our lives to something that resembles a plan. Never fear, a little engine disaster or two won’t slow us down - the circumnavigation will go on!

As you are probably aware from our Log-Blog, we experienced a catastrophic engine failure two days outside of Sydney Australia. We were given the name of a mechanic who came highly recommended and we decided to install a rebuilt Perkins 67 horsepower engine to replace “Big Red”, Starship’s failed 40 horsepower Westerbeke engine. After a lengthy installation process, hampered by “the worst winter in 40 years” we were finally ready to depart from Sydney. Our first destination was Pittwater, twenty-five miles north up the Australian coast. Upon reaching Pittwater we were to have our engine serviced by Bill Lacey the person who actually rebuilt the new engine, however upon reaching Pittwater we learned that Bill had hurt his back and would be unable to service the engine. We also found an oil leak that led to three days of engine work.

Discouraged with our new engine, but willing to continue we headed to Newcastle. We were guaranteed that the engine issues were all sorted out. This did not turn out to be the case. Upon reaching Newcastle the oil leak persisted. To make matters worse, while recharging our batteries one evening, I was astonished to hear the engine alarm sound to find the engine seriously overheated. It turns out that the hose connected to the header tank was never properly clamped on and the pipe fitting was also not correctly fitted. As a result, all of the engine’s coolant drained from the engine within seconds disabling the engine’s temperature alarm until the engine was seriously overheated. At this point we had reached the end of our patience and considered returning the engine.

After consulting the mechanic we agreed to allow him to rebuild the engine again to look for problems that may have resulted from the engine’s overheating, with the stipulation that the engine would then be dynamometer tested to give us assurance that the engine was up to the task of blue water cruising. At this point the engine was removed from Starship and I assisted with the rebuild of the engine. Unfortunately after rebuilding the engine our mechanic was unable to find a suitable testing facility and our willingness to reinstall the engine evaporated.

So today brought a conclusion to the chapter of Starship’s newly rebuilt engine. I met with the mechanic and received a full refund for the engine. Over the past two weeks we have researched and agreed upon terms to have a completely new engine (with a three year warranty) installed on Starship. Over the next two to three weeks we will have a Volvo Penta D2-40, 40 horsepower engine, with new gearbox and three bladed folding prop installed on Starship. This new engine should provide us with the reliability and peace of mind that we need to take Starship offshore.

It is now very late in the cruising season and the southern cyclone season is looming. We are now weighing all of our possible options for the remainder of the season. Please check in on our Log-Blog over the coming week as we will fill in the gap in our journal. Despite our engine saga, we continue to have an incredible Australian experience. We will also provide an update on our next move, just as soon as we figure it out. Rest assured the Blind Circumnavigation will continue. We won’t let a little engine drama stand in the way of our goal.
Posted by Scott and Pam at 11:00 PM 1 comment: