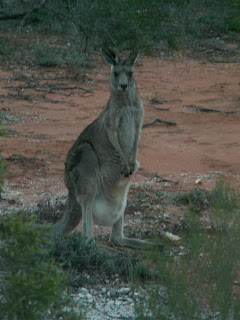 After spending nine months in Kiwiland we were able to apply some of our learned vocabulary here in Oz since much of the vocabulary crosses both countries. However, the Aussies certainly do have their unique usage of the English language and colloquialisms. I would go as far to say some of the words and expressions have found their way into our everyday vocabulary and are probably here to stay. Again, most of the words are used everyday in the English language, they just have found a different meaning here down under. I do still find myself often asking, how do you say that here? Which strikes me funny as I am asking and being answered in English. However, also it does seem there is license to shorten any word and add “y” or sometimes “o” which especially includes people’s names or places. Scott has been Scotty since the day we arrived. Thankfully, there wasn’t as much of a tendency towards Pammy. It has been fun collecting a list to share, there is a short list our visually impaired blind cricket friends taught Scott that fall into the R rated category and can not be published on this family site.

On my resume and for work I have also changed how I spell words such as organization to organisation (this applies to most words ending in “zation”), center is centre, color and harbor are colour and harbour. English (Australia) is one of the options in the MS Word spelling language list. This is the setting I use on my computer at work, so I hopefully look like I know what I am doing.

Ok, put on your kangaroo hat and try your guess at the definition/s. The definitions are given below, once you have finished:

If your kangaroo hat didn’t work, try your Aussie hat:

Magic – If it’s magic, it’s perfect, wonderful, extra special
Pinch – To take or steal something
Heaps - Lots
Flash – Gaudy
Crook - Sick
Bloody – Used in before a word to add emphasis, bloody good
Dunny – Outdoor Toilet
White Goods – Household Appliances, i.e.; washing machine
Tucker - Food
Esky – Ice Chest
Mug – Someone who is gullible
Chook – a live chicken
Wind Screen – Windshield of your car
Lounge – Living Room
Bonnet – The hood of your car
Petrol - Gasoline
Fisty Cuffs – A fight using your fists
Blind - Intoxicated
Chips – French Fries
Tomato Sauce – Ketchup
Takeaway – Food to Go
Pram – Baby Stroller
Blue – Red Headed Male, Argument, Mistake and many other meanings which are confusing
Bluey - Policeman, Traffic Ticket
G’Day - Hello
Reckon – Used like, I think, I guess, I figure
Layby – To put something on layaway at a store
Ute – A utility truck, pickup truck
Pissed - Intoxicated
Brolly - Umbrella
Yum Cha – Dim Sum
Mitty – Small glass of beer
Schooner – Large glass of beer
Alight – To depart
Slip – To take your boat out of the water
Sacked – To get fired from your job
Sparky – An Electrician
Drippy – A Plumber
Whinge or Whinging – Complain or Complaining
Tinny – Usually an aluminum boat
Push Bike – Bicycle
Bugger – Mild swear word for when something doesn’t go well or sometimes refers a person who did something bad
Bush – Going into the country, wilderness
Me – Often used instead of my, I need to get me boat fixed
Pen – Berth where you keep your boat
Hanging – If you are hanging for something, you are really in the mood, “Hanging for a coffee”
Brekkie – Breakfast, usually refers to the “big brekky”
Doona – Duvet or Comforter
Sticky or Sticky Beak – to have a look at something, i.e.; a house for sale
Bloke – Reference to a man
Sheila – Reference to a woman
Sunnies - Sunglasses
Bench or Benchtop – Kitchen Counter or Countertop
Sloppy Joe – Fleece Top
Fringe – Your hair bangs
Flat White – Espresso coffee with milk
Short Black – Espresso
Long Black – Black espresso coffee with water added
Grog – Alcohol
Roo – Kangaroo
Fair Dinkum – Genuine, Real
Dinkum – Honest, Sincere
Footy – Football, i.e. in this part of the world Rugby
Cozzie – Swimsuit (New South Wales)
Macca’s – McDonald’s
Snag – Sausage
Sanger – Sandwich
Uni – University
School Leavers – students that leave High School
Monday Week – A week from Monday
Sydney Sider – Someone who lives in Sydney
How you going? – How are you?
Blow the dogs off of their chain – Very windy
Off like a bride’s nighty – In a big hurry
Kangaroos in the top paddock – Crazy, Insane
Flat out like a lizard drinking – Really busy
You don’t know me from a bar of soap – A phrased used by someone you talk to for the first time
Stone the crows – Exclamation like “well I’ll be”
Starve the lizards – A phrase used for great exclamation!
One Tick – One minute
Beyond the black stump – In the middle of nowhere
Flash as a rat with a gold tooth – Very Flashy or Gaudy
Call a sickie – Call in to work sick, but not necessary because you are sick
Holy snapping bats – Holy Cow!
Posted by Scott and Pam at 10:33 PM No comments: